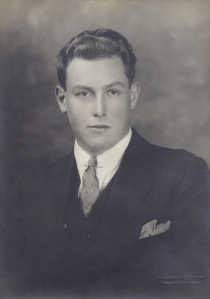 This is my father’s pedigree chart. 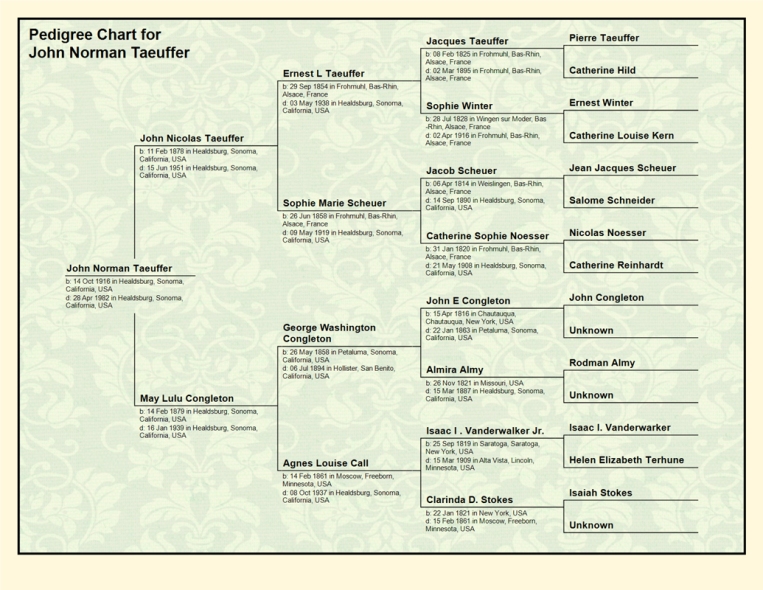 Both of his parents, John Taeuffer and May Congleton, were born in Healdsburg, California where they raised their family and lived their entire lives.

Click on the images for a closer look at their pedigree charts.

My grandfather John Taeuffer’s parents, Ernest Taeuffer and Sophie Scheuer, were both born in Frohmuhl, Alsace, Bas-Rhin, France. Three year-old Sophie immigrated to the U.S. with her parents in 1860. Ernest Taeuffer arrived thirteen years later, in 1873, as a nineteen year-old man. Click on the images for a better look.

Click here for Ernest’s pedigree or here for Sophie’s.

My grandmother May Congleton’s parents, George Congleton and Agnes Call, were born in California and Minnesota, respectively. George’s parents, John E. and Almira Almy Congleton, came to California in 1852 during the Gold Rush. Agnes’ mother, Clarinda Stokes, died in childbirth, and so baby Agnes’s father Isaac Vanderwalker gave her to John and Mary Call to raise. Although she spent her life as Agnes Call, her DNA is Vanderwalker. Click on the images for a closer look.

Agnes Call’s birth line has been traced back to Colonial Times. Much of this information was obtained through the work completed in the 1950s by Mrs. Grace Leddick Everts, a Vanderwalker descendant. She was also the official Historian of Saratoga County, New York, where the Vanderwalker roots originated in North America. Click on the images for a closer look.