John McCall was born in Scotland on June 20, 1822. Four years later, on August 10, 1826, the woman who would become his wife, Mary Fulton was born, also in Scotland. While still a young girl, Mary immigrated to Canada with her parents. In 1844, the Fultons then immigrated to Rhode Island, where Mary and John met. They were married October 25, 1846 in Providence and later moved to Savoy, Massachusetts. Two years later, on February 24, 1846, a boy was born nearby. Later in his life, he would be described as a “lame” boy, but whether his disability was due to an accident or a birth defect is unknown. When that boy was orphaned, the McCalls adopted him and named him Finley.

In January 1849, a bill was introduced to Congress proposing the creation of the Minnesota Territory in what was then the Iowa Territory. The McCalls left Savoy on February 1, 1849 and headed to that region despite the prevailing belief that the people living there were only semi-civilized. In March of that year, the measure passed and the Minnesota Territory was established. In 1855, Freeborn County, Minnesota was created. In 1859, John McCall purchased a plot of land in that region and began to farm. He became a naturalized citizen in May of 1860 in the 3rd District Court.

In July 1860, the family was living in Red Rock Township, Mower County, Minnesota where young Findley attended school. By now they had dropped the “Mc” to make their surname “Call.” Living next door were James and Eliza Stokes, possibly brother and sister-in-law to Clarinda Stokes Vanderwalker who lived several miles away on the other side of Austin, Minnesota.

On February 14, 1861 in Moscow, Mower County, Minnesota, Clarinda Vanderwalker gave birth to a baby girl, who she named Agnes. Sadly, Clarinda did not survive the childbirth leaving her husband Isaac with four daughters and one son under the age of thirteen in addition to the new baby. Isaac did not own a cow and had no way to feed his new infant daughter. The nearest neighbors who did own a cow were the Calls, who lived 16 miles away on the other side of the main market town of Austin. As Isaac traveled the 16 miles through the drifted snow from the Call’s farm to his own on horseback with the milk for little Agnes, the jostling would cause the milk to be churned into butter. This situation was clearly not working out and the solution quickly became obvious: the Calls would take in the baby. A few months later, Isaac Vanderwalker left Minnesota to fight for the Union in the Civil War. By the time he returned, Agnes had become a permanent member of the Call family.

In 1868, the Calls moved from the Red Rock farm to the nearby settlement of Lansing, Minnesota where John established a shoe store. He placed an ad in the Mower County Register in 1869 advertising “Boots and Shoes at the lowest possible rates.” The family became active in the local Methodist Episcopal Church. In January 1868, Mary and John served on the Committee of Arrangements for a fund raising event to benefit the Reverend Canfield and his family. In 1869, the Mower County Register published a “Sketch of Lansing” that listed John’s store as the only outlet for footwear in town. But as pleasant as life in Lansing may have been, it would not be long before an opportunity to the West beckoned to the Call family.

The trans-continental railroad was completed when the golden stake was driven at Promontory Point, Utah on May 10, 1869 providing rail service west to Sacramento, California. The connecting lines extending service to Santa Rosa in Sonoma County were completed in 1870. In that same year, the Calls decided to relocate to the West. John, Mary, and little Agnes boarded the train and told their friends they were headed for Santa Rosa, California, leaving 24 year old Findley on his own in Minnesota. As they were headed across the plains in the train, they were reportedly waylaid by a band of American Indians. Mary Call was afraid that the Indians who boarded the train would steal little nine-year old Agnes so she stuffed her under the seat and covered her with a pillowcase. The crisis passed without further incident and they were soon on their way again.

In 1870, the population of Healdsburg, California was around 1,750 people. The planned

railroad extension that would reach the town the next year promised to bring an expansion of the agricultural industry as well as many tourists to the increasingly prosperous town. By the summer of 1870, the Calls were living in Healdsburg and John had set up his shop “next door north to Hertel’s store” on the west side of the Plaza. The following October John moved his shoe store into the new building on the Odd Follows 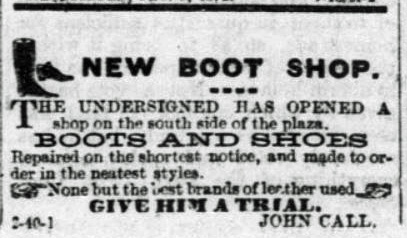 lot on the South side of the Plaza next door to Lockwood & VanSlyke’s book store. The Russian River Flag reported that the shoe store cost $200 to build, while the bookstore cost $225. John continued to ply his trade there on the Plaza for some years. Meanwhile, Mary kept house and little Agnes attended school.

John had been a Master Mason in Minnesota and in 1871 he joined the Free and Accepted Mason Sotoyome Lodge No. 123. He took his turn as an officer of that organization, serving as Tyler (the guy who guards the door during the lodge meetings) from 1875 through 1880.

Lodge life must have agreed with him, because he was also a member in good standing of the Healdsburg Lodge No. 64, Independent Order of Odd Fellows (I.O.O.F.). In 1874 he served as Vice Grand (second in command) and in 1875, he served as Noble Grand (presiding officer) for that lodge.

At fifty years old, John Call had the first indication of what would become a debilitating vision problem later in his life. Just after New Year’s Day 1873 he traveled to San Francisco to consult with an oculist who determined that he was developing cataracts in both his eyes. This was not something that a shoemaker could live with and so he underwent what was in those days a dangerous surgery to have them removed.

The following year John made two major real estate transactions. In January 1874 he purchased lot 1 of the Sotoyome Rancho from John N. Bailhache for $750. His descendants would hold that land for the next 100 years. In February 1874 he sold the south half of lots 76 and 91 in Healdsburg to Mrs. Louisa J. Vaughn for $850.

Meanwhile, in 1878, daughter Agnes had married George Washington Congleton and the couple had moved in with George’s twice widowed mother, Almira Almy Congleton Burgess in her Healdsburg home on Sherman Street.

In 1881, son Findley left Minnesota and joined the rest of the family in Healdsburg. By 1882, John Call had “retired” to his farm on Bailhache Avenue and was focusing solely on

farming, while his son, Finley, took over the shoemaking business. The main crops in Healdsburg in the 1880s were grapes, lumber, and hops. While the Call ranch focused on hops, they dabbled in plums as well. In an article debating the virtues of various plums

and prunes, the August 11, 1881 Russian River Flag reported “John Call, of Bailhache’s addition, thinks that the Livey plum, propagated by him, is the best variety for this section.”

In 1887, daughter Agnes obtained a divorce from George Washington Congleton and, along with her two young children, Lulu Mae and Claude, moved back in with John and Mary Call in their Bailhache Avenue home. John’s health had begun to decline by that point and in 1889 he even withdrew from the Masons.

In his final years, John lost most of his sight and became dependent on his wife and daughter. Agnes married Albert A. Wilson in 1890 and the couple took over management of the ranch. John Call died at his home on Bailhache Avenue on October 24, 1892 and was buried in Oak Mound Cemetery. His obituary mentioned that the funeral had been conducted under the auspices of the Masonic lodge and that it had been largely attended.

In March 1893, John and Mary’s son Finley Call, died at only 47 years of age and was buried near his father in Oak Mound Cemetery. Three months later, Mary gained a small modicum of notoriety when she joined with a few of her neighbors to petition the Board of Supervisors to have their area removed from Russian River township and annexed to Mendocino Township. The grievances noted included the facts that the Russian River Township police officers located in Windsor were not able to respond in a timely manner to the “drunken tramps and Indians who congregate in the vicinity of our homes,” that since they were living in the suburbs of Healdsburg (in Mendocino Township) they did most of their business in that place, and that because they were living so far from their voting district they were “sometimes deprived of our votes on important election matters.” After some of the original petitioners had second thoughts and asked to have their names removed from the document, it was voted down summarily.

Mary once again expressed her resolve and independence publicly when, in 1899 after 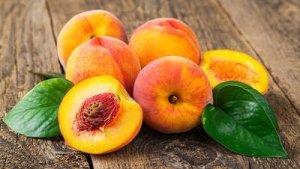 attending a fruit growers meeting held in Truitt’s Theater, she signed an agreement with other “prominent” peach growers. The document affirmed that these growers, representing about 2,000 tons, would refuse to accept payment of less than $25 per ton for freestone nor less than $30 per ton for cling peaches.

Mary Call continued living with Agnes and Albert Wilson on the Bailhache Avenue ranch. In July 1902 she was an honored guest of the Old Folks Society annual dinner. The next month a party was thrown for her 76th birthday. The Healdsburg Tribune reported that “Mrs. Call is as hale and hearty as ever, and those present expressed the wish that she might see many more such pleasant birthdays.”

Mary continued to do well for several more years, but in later years began to suffer from dementia. In 1908 she signed ownership of the Bailhache Avenue ranch over to her daughter, Agnes Wilson in a gift transaction. Agnes continued to care for her until her death on May 20, 1911. Mary’s obituary stated “Gramma Call, as she was reverently referred to by all her friends,…was an interesting talker and it was a pleasure to listen to her narrate the early day experiences and the changes that have been made during her long life.” She was laid to rest next to her husband in Oak Mound Cemetery.