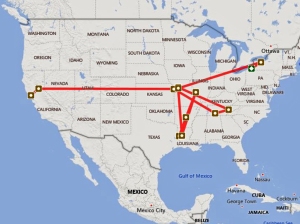 My great great grandparents, John E. Congleton and Almira Almy had a large family. But like most families in the 19th century, not all of their eleven children would make it to adulthood. Learning where each of them had been born allowed me to trace the meandering migration path they took across America which finally lead them to settle in California.

Click here for a copy of John E.’s descendants.

My father’s maternal line goes through John E. Congleton’s son, my great grandfather, George Congleton who married Agnes Call (nee Vanderwalker). My father’s paternal side of this generation is represented by Ernest Taeuffer and Sophie Scheuer.

Click on the images to get a better look at George and Ernest’s descendants.

Click here for John’s descendants or here for Eugenia’s.