In February 1861, in a drafty frontier cabin on a farm in the newly-minted state of Minnesota, Clarinda Stokes Vanderwalker died giving birth to her daughter Agnes. Clarinda and husband Isaac Vanderwalker already had five children, four of them girls. They were fourteen year old Elizabeth, twelve year old Helen, ten year old George, six year old Mary, and five year old Clara who was afflicted with dwarfism. The two older girls may have wanted to take care of their new baby sister Agnes, but in the dead of winter in rural Minnesota it could not have been easy. As Agnes’ daughter Helen Wilson Peterson describes in the audio clip below, the best option available to widower Isaac Vanderwalker was to give the baby away to the neighbors who had access to a milk cow.

Only months after Agnes’ birth the Civil War broke out and soon after her first birthday her birth father Isaac Vanderwalker joined the Union Army. He served in the 4th Regiment of Minnesota Volunteers Company K from April 6, 1862 through April 5, 1865, marching around the United States from Missouri to Texas to Georgia to Virginia to Washington, DC. Upon his return to Minnesota in September 1865 he married local widow Carrie Smith and they began a new family.

Meanwhile, Agnes lived with her adopted parents John Call and Mary Fulton Call and her adopted brother Finley Call in Lansing, Minnesota, about 10 miles away from her birth siblings. John Call had been born John McCall June 20th, 1822 in Scotland and had immigrated to the United States as a young man. By the time he had established his shoe making business in Minnesota in the 1850s he had dropped the “Mc” from his name.

It is unknown whether or not Agnes’ siblings maintained a relationship with her as she grew from baby to toddler to young girl. But she was about nine years old when the Call family left Minnesota so it is possible that she had memories of her Vanderwalker siblings. In any event, mail service was spotty and expensive in the mid-1800s and any relationship that may have existed and even memories would have soon faded. So imagine Agnes’ surprise when almost fifty years after she had left Minnesota the following ad appeared in the April 26, 1916 edition of the Santa Rosa Press Democrat: 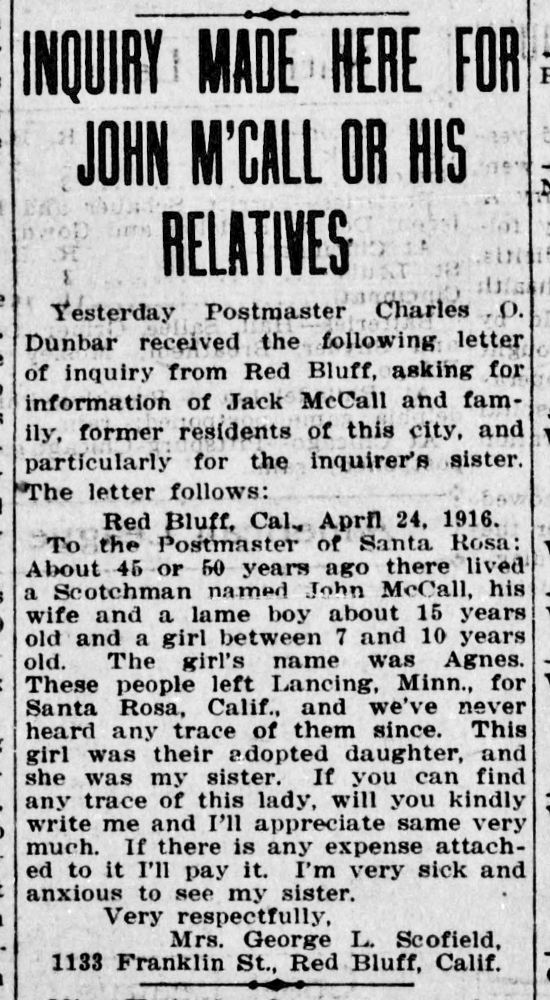 Mrs. Scofield turned out to be Agnes’ older sister, Helen Vanderwalker who had been about twelve years old when Agnes went to live in the Call household, and about twenty when the Calls left Minnesota in the late 1860s. By that time Helen had married George Scofield, a local clerk in Austin, Mower County, Minnesota. And in the early 1900s the Scofields had relocated to Siskiyou County, California.

The ad in the Santa Rosa newspaper apparently did the trick and it was only a couple of months later when Agnes and her sister were reunited. The July 8, 1916 edition of the Healdsburg Enterprise reported:

SISTERS MEET AFTER SEPARATION FROM YOUTH
Mr. and Mrs. A.A. Wilson returned recently from an enjoyable automobile trip to Red Bluff. The trip to the Sacramento valley city was taken for the purpose of Mrs. Wilson meeting her sister whom she had not seen since a baby. In deference to the family that raised Mrs. Wilson her sister kept her identity a secret until after her own parents had died. When this had occurred the two ladies quickly got in communication with each other. No doubt many reunions will be held by the two now that they know of each other’s whereabouts.

Unfortunately, the story does not have a happy ending. As Helen Vanderwalker Scofield had indicated in her original letter to the Santa Rosa Postmaster, she was seriously ill. The front page of the September 30, 1916 edition of the Healdsburg Enterprise reported:

GOES TO ATTEND SISTER’S FUNERAL
Mrs. A.A. Wilson was called to Red Bluff Tuesday by the death of a sister. Just four months ago Mrs. Wilson heard of her sister’s whereabouts, and the two met for the first time since they were separated when Mrs. Wilson was two years old. During the past summer Mrs. Wilson made a visit to this sister, and she was extremely pleased to renew the sisterly love. It is a sad blow to her that she should lose this sister so soon after finding her. 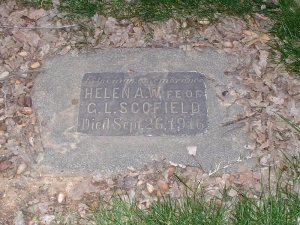 Helen Vanderwalker Scofield died September 26, 1916 in Red Bluff, California and was buried in Oak Hill Cemetery in that city. We can only hope that it was a comfort to her to learn that her baby sister Agnes had named her youngest child Helen, perhaps as an unconscious homage to her long lost older sister.