Giacomo Giorgi and Agnese Giancoli were both were born in the small town of Boveglio in the Tuscany region of Italy. They spent their life together in the farming town of Healdsburg, California where they raised a family. For more about their immigration story click [here]

We are so very fortunate to have wedding photos for Giacomo and Agnese Giorgi and all their children. Hover over an image to see the caption or click on the image to enlarge.

Giacomo Giorgi first came to the United States in 1882. He returned to Italy to marry Agnese Giancoli 1897. They set up housekeeping in Healdsburg, California where they raised five children. They are both interred in Oak Mound Cemetery in Healdsburg.

Eva Veronica Giorgi married Italian immigrant Vittorio Alberto (Victor) Buchignani on May 6, 1919. In accordance with the law, as a woman this resulted in her losing her United States citizenship. The couple raised two children, Maria Columbia and Richard Victor. Eva and Victor are interred in Oak Mound Cemetery in Healdsburg.

Maria Giovanni (Mary) Giorgi married Guido Nanni on June 1, 1929 in Healdsburg. The two lived their lives in the San Francisco Bay Area where they raised their two daughters, Alberta Marie and Emma Jane.

Eugene Joseph Jesse (Joe) Giorgi married Catherine Poulsen August 15, 1931 in San Francisco. They would make their home and raise their daughter Catherine Agnes there until retiring to Healdsburg.

Maria Louise Giorgi married Basilio John DalColletto August 11, 1933 in Healdsburg when she was 28 and he was 41. There they raised their three children, Peter Basil DalColletto, Leon Giacomino, and Ramona Louise. The couple is interred in Oak Mound Cemetery in the plot alongside Louise’s parents Giacomo and Agnese. 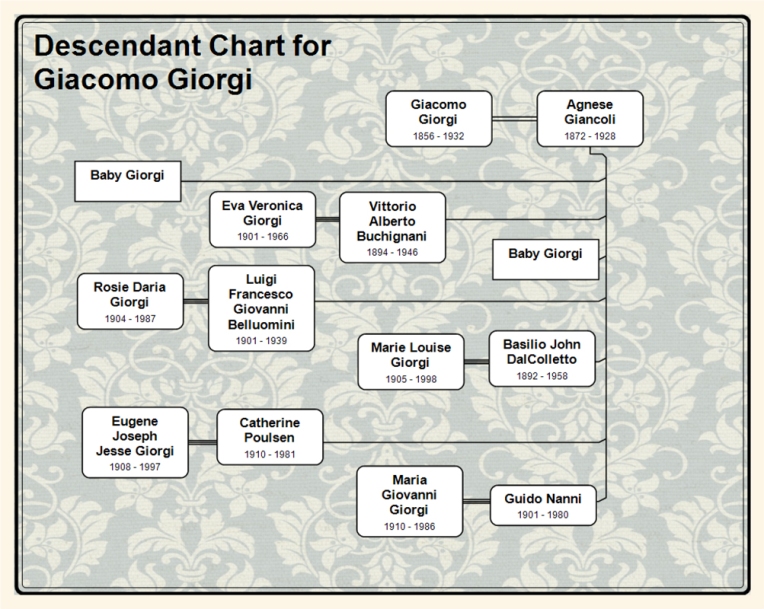