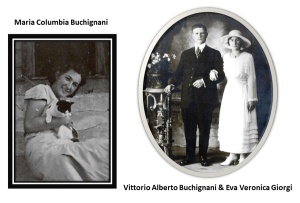 Growing up in Healdsburg, California I remember spending a lot of time visiting with my mother’s cousins on her Giorgi side. But there were also numerous families in town and the surrounding area named Buchignani, and we never socialized with any of them. My mother’s explanation was that “We’re not related to them.” By the 1990s there were 39 Buchignani families in Sonoma County. There were 160 in California. But, of course, we were not related to any of them. 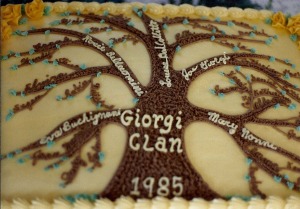 In 1985, my Giorgi family held a reunion in Healdsburg. My sister, Joanne Taeuffer, wrote a family history using research and remembrances from our mother and other family members. From this work I learned that my mother’s father, Vittorio (Victor) Buchignani had been born 26 September 1894 in Carignano, Lucca, Italy and that he had immigrated to the U.S. in 1910. His parents had been Orlando Buchignani and Columba Puccetti, and he had had a brother named Natale, who had remained in Italy. And that was about all.

After my mother died in 1994, I embarked on my journey into our family history. Admittedly, I focused mostly on my father’s side. This was, in large part, because most of his people had come to the United States much earlier than my mother’s people had and consequently the records they had left were written in English and easier to read.

Nevertheless I was able to find the record of 16 year old Vittorio Buchignani arriving at Ellis Island in 1910 on the S.S. Berlin. The ship manifest indicated that he was coming to stay with his cousin who was working in a brick factory in the tiny village of Waynesburg, Ohio. By the next year, 1911, he was in San Francisco working at the Gray Brothers Brickyard. Apparently that type of physical labor did not suit Vittorio, because soon he was working in a bar in San Mateo. By 1917 his World War I Draft Registration Card indicated that he was working as a grocery salesman for Orlando (sic – it had actually been Oreste) Buchignani’s grocery store in Healdsburg. Surely having the same surname as the boss could not have been a coincidence. There must have been a family connection, right? In 1919, Vittorio married local girl, Eva Veronica Giorgi, which resulted in her losing her American citizenship (but that is a story for another time).

THE ODD MAN OUT

In 2012 I came across an article written by Shonnie Brown, well-known Sonoma County genealogist-for-hire and popular newspaper columnist, detailing a Buchignani family reunion that had recently taken place. When I contacted her asking if she had any additional details about the family genealogy, she referred me to Suzy Buchignani in Healdsburg. Suzy was extremely helpful and explained that she had built her husband Ken Buchignani’s family tree for their recent reunion. Her work had traced that family back to Narciso Buchignani whose son had immigrated from Carignano, Lucca in 1907, just three years before Vittorio. But my grandfather didn’t show up in that tree. Nobody living knew where Vittorio might fit in. Suzy was able to put me in touch with another family researcher, Stacey Joose, who had also done some research into the second Healdsburg Buchignani family line.

It took until 2013 for me to get in touch with Stacey who had traced her Healdsburg Buchignani family back to Vincenzo whose son had immigrated from Carignano, Lucca in 1896. But again, my grandfather wasn’t in her tree. In the course of our correspondence she happened to mention that her two great uncles Angelo and George Buchignani had owned a bar at 201 Railroad Avenue in San Mateo, California in the 1910s. Now wait a minute…That is the bar I have a picture of Vittorio standing behind! Being able to provide Stacey with a photo of her great uncles’ bar was one of those goose-bump genealogy moments that are equally rewarding for the donor and the recipient. Priceless!! 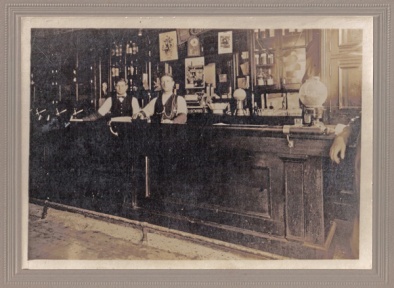 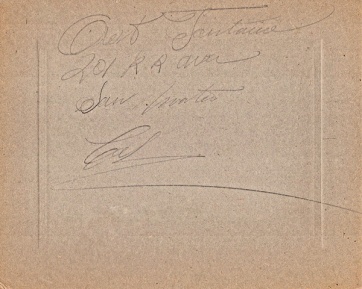 Now if Vittorio had found a job with these Buchignani brothers, how could he have not been related to them in some way? Or did he just go from town to town looking up people named Buchignani in the phone book so he could hit them up for work?!?

So by 2014 I had learned that the two Healdsburg Buchignani lines could be traced back to Lucchesi ancestors Vincenzo and Narciso. Family lore said that they were uncle and nephew, but nobody had proof. Nobody knew where Vittorio might fit in, so everybody assumed that he didn’t. He was still the odd man out.

In 2015, the genealogically inclined Buchignani folks had agreed to get together in Healdsburg the day before Thanksgiving to compare notes. Suzy was kind enough to invite possible-relative me to join them. When I arrived I found they had laid out printed copies of the family trees of the Narciso and Vincenzo Buchignani lines on either side of the long dining room table. The descendants present aligned themselves on the side of the table corresponding with their family tree. I stood awkwardly at the short end of the table, like Vittorio, the odd man out.

Enter my potential cousin John Puccioni, raised in Healdsburg but recently retired and living in Colorado, whose grandmother had been a Buchignani. He had taken the time to sift through the unindexed vital records from Lucca available on the LDS Website Family Search and had found some crucial records, but he had not been able to translate them completely. My contribution to the pre-Thanksgiving gathering was to connect him up with the Facebook group Italian Genealogy where he was able to get the documents translated by an expert. It turned out that Vincenzo and Narciso were actually brothers! Their father was Ranieri Buchignani. The two Healdsburg Buchignani branches were now linked definitively. Hurrah for them!!

But what about Vittorio? Perhaps he came from another, yet unknown son of Ranieri. But how would we find out? The civil records available on Family Search only exist for events that occurred between around 1860 and 1890. We needed to go back further to determine whether or not my line might lead to Ranieri. But how could we get access to the early church records in Carignano?

LET’S GO BACK TO THE OLD COUNTRY

Meanwhile, I had retired in 2014 and had been studying the Italian language at Glendale City College. The school was organizing a study abroad program in Italy for January 2016

and so I signed up. After a whirlwind four-week semester studying Italian culture through film, touring all the great spots in Rome, and eating a lot of amazing food, the rest of the group went home and I set off by myself to look for my ancestors.

After spending an amazing four days staying in Boveglio with my cousin Anna Cesari on my Giorgi side (but that is a story for another time), I headed westward toward the community of Carignano just to the north of Lucca. I arrived at the Hotel Carignano in the early afternoon and checked in. It was 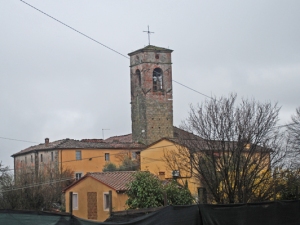 February and the place was deserted. I decided to drive up the hill to the nearby church, Chiesa di Maria Assunta, to see if I could determine when they held Mass and when the church might be open. I spotted the parking lot sign just below the church and pulled the rental car in. Miracle of miracles! The lot was filled with cars! The church was open right now!!

I grabbed my camera and slogged through the muddy parking lot toward the church, which was abuzz with activity. It was Carnevale week and they were selling gift baskets of traditional treats in the room just outside the main church entrance. I approached a gentleman there and in halting Italian I tried to tell him that I was looking for old church records. He seemed mystified, but a mature woman overhead me and understood well enough. She grabbed me and dragged me inside the church and over to the elderly priest. He spoke absolutely no English, but apparently I was not the first crazy American to show up there with a similar request. I explained in Italian that my grandfather had been born nearby and that I was looking 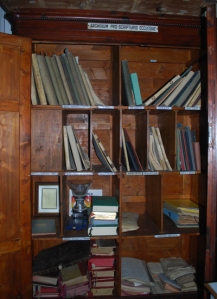 for the birth records of my great grandparents, Orlando Buchignani and Maria Columba Puccetti. I knew the dates, so he was agreeable and lead me back past the altar and into a dark room with the cabinet that held all the old records. He brought down the book of baptisms that began in 1790. It was Volume III. How far back might the earlier volumes go?!?

Before long I was looking at the original record of Orlando Buchignani’s baptism in January 1851. It identified him as the son of Francesco and grandson of Ranieri. There was the link! I WAS related to all those other Healdsburg Buchignani families!! 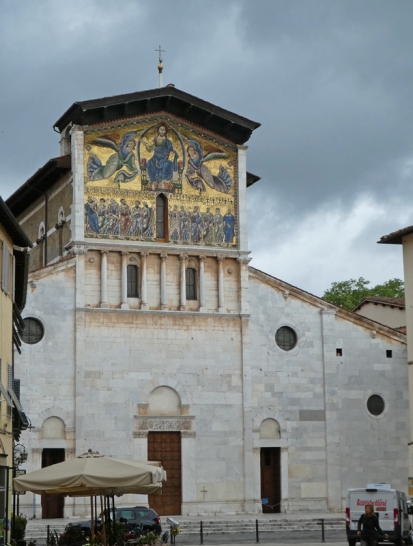 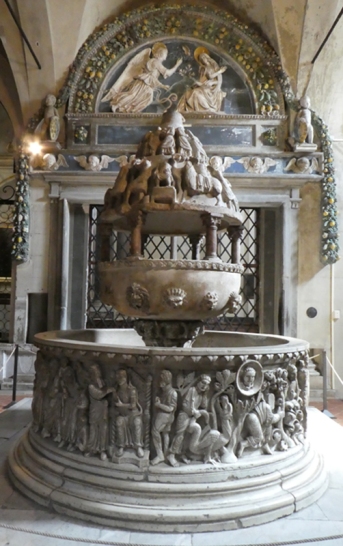 Over the next three days I was able to spend a total of six hours hunched over the table in the dark room lit by a single bulb, which I would estimate at about a 10W power rating. I spent the time photographing every record that included the surnames I knew to look for: Buchignani, Puccetti, and Puccioni. The translation and analysis of these records would have to wait until I was back in the states when I would have more time (not to mention better lighting). It would turn out that through these records I would be able to identify at least 50 new blood relatives going back three generations beyond what I had known before my trip. 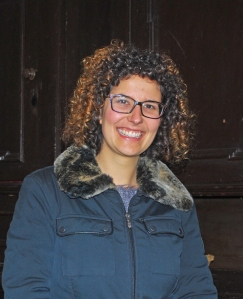 While I was poring over the records, the word went out into the neighborhood that some Buchignani descendant had arrived from America and was in the church looking at the old books. So it was not long before a pretty young lady arrived to say hello. She introduced herself as Giada Buchignani, great granddaughter of Natale, making her my second cousin once removed. She gave me a list of her aunts and uncles that coincided with the list that my mother had compiled during her visit to Carignano in the 1980s, about 30 years earlier.

I’VE HEARD THAT SOMEWHERE BEFORE

On my second day in Carignano the church was closed, so I took a walk through the cemetery. I knew that in Italy the practice was that after a certain amount of time had passed the remains would be removed and the graves reused, so I wouldn’t find plots older than 50 or 100 years. But we genealogists just can’t stay away from a graveyard. As soon as I opened the creaky rusted gate I noticed a group of older ladies placing flowers on the graves at the other end of the cemetery. One redheaded lady approached me and 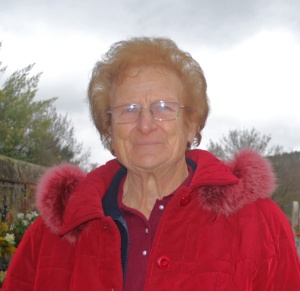 introduced herself as Giulianna Buchignani, daughter of Natale. This was my mother’s first cousin! She gave me a tour of the cemetery, pointing out the various Buchignani graves and telling stories about those people contained within.

Presently, we stopped in front of one Buchignani plot. Giulianna pointed at it and shook her head. Then I heard my mother’s words (only in Italian) come out of her mouth, “We are not related to them.” I didn’t have the heart to try and set her straight!

2 thoughts on “How I Found My Buchignani Connection”